Heading to Grand Junction via the land of nothingness

After Trail Ridge Road ended, we hopped on I70 en route to Telluride, which is supposedly the bread and butter of Colorado. As we drove we started calling campsites, just to make sure they had vacancies. Lo and behold, all the sites were full. Rather than panicking, we shrugged our shoulders, and decided to go to Grand Junction instead. When we looked on our map, we saw it was a shorter drive, there was a National Monument nearby, and the town was also considered Colorado’s wine country. So why not?
We knew we had to go southwest, but apparently when I70 splits, its “East” and “West” options are more like “West” and “More West.” Basically, we went “more west,” and before we knew it were close to Utah. Woops. So a four hour drive turned into an eight hour one, but at least the drive was pretty!
So on this drive in the land of nothingness, we would frequently see signs for school crossings. Yet, where were the schools? Where were the people? Every now and then we would see a house, but there were no towns, no sign of civilization…

Finally, we got our answer. Do you see in the picture below? A Target! THATS where everyone is. I guess they live in there, too.

After an impromptu day of driving, we finally made it to the town (city?) of Grand Junction. We were tired, hungry, and especially dirty. We were hoping to find a campsite with showers, but when we checked out Colorado National Monument, they only had running water and toilets. But camping was $10 a night. We had priorities.
Colorado National Monument ended up being beautiful, and even without the showers, we stayed two nights. I took these pictures right when we arrived before setting up camp: 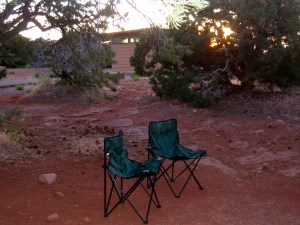 Posted on August 10, 2010, in Uncategorized. Bookmark the permalink. Leave a comment.