← >BIG news
>Things that cost an absurd amount of money and, likewise, make me mad →

>A route stretching its borders

>After talking with my new bandmates over skype the other day, I learned about our tour-route; many of the cities we are performing in are places that Nic and I traveled to back in June. I immediately drew a map of a rough idea of where we’re headed, and compared it to Camping Out in America’s journey: 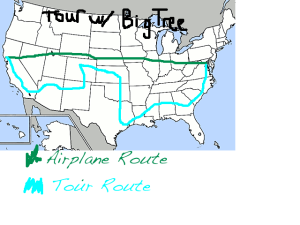 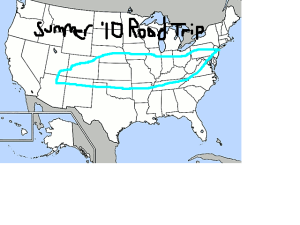 *Ha, I just realized I drew the starting and ending of the tour in DC, not New York. MY BAD
Similar in certain ways: we’re stopping in Boulder and Denver, driving through Flagstaff, Taos, and parts of Oklahoma. Still, this next venture stretches out June’s ever so slightly: we’re driving down the coast of California, we’re not skipping out on Kansas, and we’re going all the way to Austin to play at SxSW!! Then, we’ll see places like Mississippi and Georgia before headed back up the familiar mid-east coast, ending in Brooklyn, NY.
How else will this be different? No tents this time, but rather hard floors, couches, and (hopefully) roofs. There will probably be more eating out, and definitely more drinking. Long hours of driving and rehearsing and performing, rather than driving and hiking, sitting and reflecting. We wont need to stop for gas, but rather restaurants to fill up our engine with vegetable oil. The car will smell like grease, not damp tents and hiking boots.
More Similarites? I get to rediscover parts of America on a wildly new adventure. I get to make new friends, challenge myself, and follow another passion of mine. Last summer I was able to reconnect with my love of the outdoors. Now- it’s time for music.
Sleeping on Floors in America: coming soon.

Posted on January 13, 2011, in Uncategorized. Bookmark the permalink. 2 Comments.

← >BIG news
>Things that cost an absurd amount of money and, likewise, make me mad →