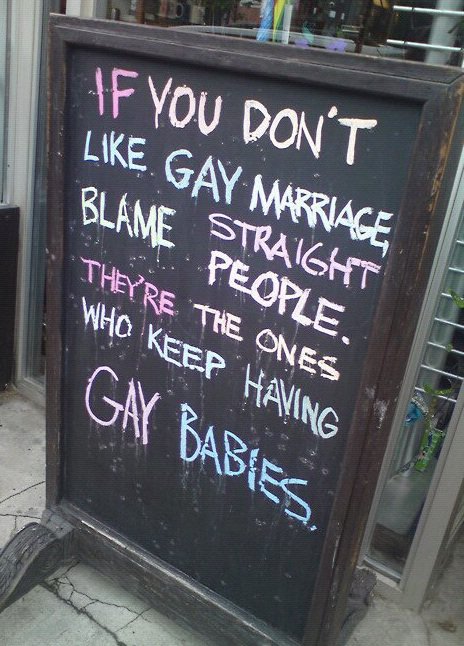 The honeymoon has just started for marriage equality; last week, gay marriage was finally legalized in New York State.  The debate honestly infuriates me; there is absolutely no reason why gay couples should not be allowed the same legal rights as straight couples.

I get it.  Marriage is historically a bibical matter.  It’s the union between a man and wife, under God.  However, marriage has radically transformed into largely a legal status, and even the most heathen of them all can get married–as long as they’re straight.

And what about the gays?  Even the most religious of them have been denied marriage.  They could be insanely in love, completely devoted to one another.  It doesn’t matter.  And let’s not even discuss the divorce rate these days between heterosexuals; even the most instable couples are granted marriage rights, even if they are getting married for the wrong reasons.

But gays can get a civil union! So what? Civil Unions are state-based and do not grant partners the same protections, such as such as taxation, pension protections, provision of insurance for families, and programs like Medicaid.  Whereas with marraige, you are granted social security, judicial protections and immunity, immigration and residency for partners from other countries, medicare, child support, estate and gift tax benefits, and welfare.  (these aren’t even half of them!)

The way I see it, even the most unloving pagan couple can get married in Vegas and be granted all of these rights, and a devoted gay couple cannot.  How is this fair? Marriage is no longer simply a religious tradition, so the conservatives in our nation need to get the sticks out of their asses and realize how incredibly wrong it is to try and deny marriage rights to gays.  I seriously do not think Jesus would mind.

I wonder when the other 44 states will do the same.

Posted on June 29, 2011, in Uncategorized. Bookmark the permalink. Leave a comment.