← incase you were wondering,
vernacular →

I experienced my own mini 9/11 the other day in the city.  I was in a coffee shop (sounds better than saying Starbucks) when I heard a loud explosion and saw people running down the sidewalk, covering their faces from the smoke that was filling up the street.  Oddly, I looked around me and nobody seemed startled by the predicament we were in. 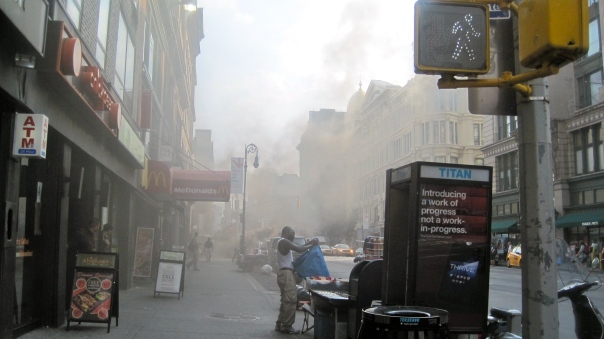 Turns out it was just a manhole explosion. No big.

In other news, I apologize for recently being MIA.  My cant-sit-still-must-be-doing-something-productive-at-all-times-lifestyle has been flourishing lately.  I  began interning in the rotten-apple itself, as the editor for a new Charity Blog that’s being launched on a very popular website in NYC.  Since I’m so caring and love to work for free, I balance being in the office three days a week with waitressing on Long Island three days a week, leaving me with Thursdays to feel unproductive and lazy.  The blogging thing has been going well so far, except that sitting in front of a computer all day is one of the hardest things I’ve ever done….in my life.

I’ve also been thinking about my past year, and how many people have deemed it “bizarre.”  I guess when I speak about it it does sound a bit crazy;  I graduated, went on a camping trip across the country, moved to Maryland, interned at the Smithsonian, found a waitressing job, moved into DC and lived with three gentlemen and a dog, interned at another nonprofit and learned how to write grants, moved back to NY, flew to San Francisco to temporarily join a band and go on tour across the country, found myself back in NY, got another waitressing job, got a tattoo, got an internship, repeated the word “got” a lot, and landed three actual job interviews (one in NYC, one in Boston, one in ….Liberia.)

I guess that’s kind of weird.

Or maybe it’s my generation.  My past year might sound crazy, but my other friends are embarking on different, yet just as exciting adventures.  I have a friend in the Peace Corps in St. Vincent, and another that moved to Seattle to work for the JVC.  Nicole moved to Manhattan to get her Master’s, is now the personal assistant for one of the most powerful woman lawyers in NYC, is helping write an African cookbook, and is going to Iceland in August.  My other friend moved to Chile to teach English, became fluent in Spanish, and landed a nonprofit job in Santiago.  Ali lived in Canada before moving back to NY, getting a job at a medical school and going back to school herself.

So maybe I’m not that crazy.

Or maybe, we all are.

Side note: Can you see what I covertly snapped a picture of?  That’s a guy on the LIRR with a disc-man in his lap.  Thank you, Man. You have restored my faith in humanity.

Posted on July 13, 2011, in Uncategorized. Bookmark the permalink. 1 Comment.

← incase you were wondering,
vernacular →