Boy, I really like the rain.  When I left the office yesterday, leaped down three flights of stairs, and said goodbye to my elevator-man-best-friend, I walked out onto the street and was greeted by a thick, cool rain.  I instantly started smiling.

Most people hate walking in the rain-especially in the city.  I get it: your clothes are probably super nice and are dry-clean only, your hair will get all frizzy and you’re gonnnnna look WEIRD, and those shoes were 350 dollars and rain water probably isn’t the best thing for them. (Also, how come everyone in NYC has really nice shoes?)

But for me, I wear the same flip flops I’ve had since High School, I don’t own anything dry-cleaned worthy, and I’d much rather walk in a cooler, albeit wet environment than feel like a hair-dryer is blowing hot heat directly in my face.  The rain also takes away some of the city-smells. When it’s hot and balmy, I smell a mix of dirty heat and rubber tires and sidewalk trash and halal food (although that smells good) and subway smog and dog urine and whatever else that makes up that unique scent I like to call…“New York City.”

So here I am walking down the street, and it’s raining pretty hard. And I’m smiling and smiling and getting wetter and wetter and goose bumps are forming on my arms and my tattoo looks all weird and neat and I’m happy and there’s mud on my heels and I’m smiling.  I constantly say “no thank you” to the umbrella-sellers, wishing I had time to explain to them that I’m already soaked and a crappy $5 umbrella will not make me dry again, while simultaneously believing that they must be smarter than any weather man since within 12 seconds of the first drop of rain they appear out of thin air selling their crappy umbrellas to sorry tourists and people with really nice shoes.

Then I realize how much I’m smiling in the rain and that when I’m at the office all day I probably rarely smile.  And it’s not that I’m not happy—it’s just that when you’re sitting in front of a screen all day and you’re sucked into your own little world and you’re typing and researching and thinking and concentrating that it would look weird if someone was spying on you and you were doing all of that stuff while smiling.  Right?  I do smile when I talk to people; I strike up conversations with the girl next to me who is from Burlington and Serbia, so I grill her about life and why the hell she’s in NYC and does she really like coconut water and how can you afford to live in the West Village?  I am also forced to talk to this guy in the office that is either extremely hipster or a little bit gay, but is definitely ADD and travels around to different computers to do work and tap his hands on the keyboard.  He asks me about every 45 minutes what I’m listening to on my headphones and this usually bugs me because they’re noise-canceling for a reason, and I have to take them off just to hear him repeat that same question, where I always lie and say I’m listening to something weird so he thinks I’m weirder than him which is an absolute fabrication.

The other time I smiled in the city was when I was on the subway and I saw this couple fighting and the girl was crying and the guy was touching her butt and I wanted to be like dude, she doesn’t want you touching her butt right now you suck but I kept that to myself and that made me smile. And then these two guys from Jersey were asking their third friend how much they’d have to pay him to move back to New Jersey and he said $50,000 a year and I thought that was AWESOME and then I found a gift that my boyfriend Azin left for me but unfortunately someone stole the gift and I was left with only the tag. 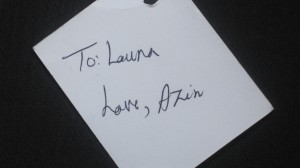 And I also smiled when I woke up from a dream the other night.  I dreamt I was walking out onto my friend’s roof down by South Street Seaport and I discovered a whole secret world lying on top of Manhattan and there were trees and driveways and small, simple houses and the ocean was feet away and you could see the tops of skyscrapers poking out from underneath the secret world’s ground. It was beautiful and peaceful and perhaps symbolic. And I smiled and smiled and smiled.

Posted on July 27, 2011, in Uncategorized. Bookmark the permalink. 1 Comment.