structure (not a poem)

Time is really going turbo on me. It felt like just yesterday I was stuck in what was perhaps the most uncomfortable summer of my life—and now it’s November. My favorite holiday is almost here. My favorite season is a month away. And.. and..I think I’ve mustered up some sort of routine! If time could just chill out for a little while right now, that’d be cool.

As Nicole put it to me yesterday, “Dare I say we both have structure in our lives?!” I think we both made it—finally. Our lives sort of mirrored one another’s for the last five months. I went first. I spent all summer with a backpack, trekking back and forth from Morningside Heights to Chelsea to Greenpoint to Northport. I slept in a different bed each night, worked in a cubicle and wore a tie at a restaurant and lived in libraries, wondering what the hell. I. was. doing. In my head, I mapped out driving routes to Seattle. I wondered if I should have accepted my Peace Corps invitation. I contemplated building a lean-to and writing a very, very long novel about absolutely nothing.

My oh my have times a’ changed (cue Dylan song).

When I moved to Brooklyn, (and freaked the fuck out), and got a job (!), I passed the baton off to Nicole. After finishing her Master’s and oh, just flying to Iceland for a quick vacation with friends and glaciers, she took on the role of what we like to call “the schlepper.” With backpack on, avocados and fig bars in purse, and enough clothes to get through the week, she began her full time 9-5ish job with a super-rich, ancient-old lawyer while living the bed-hopping life. While staying with friends and running around this whole damn city with some quick in-and-outs on the LIRR is often FUN, it’s tiring. And that whole “when will this stop, am I really moving forward?” thing creates anxiety. Lots of it.

All is different now. Nicole just accepted a kickass job at some environmental place doing environmental things with excel spreadsheets and apparently a good-looking boss.  (I’ll never really understand what you know and what you do). I’ve moved fulltime to Greatist, where I work on what I love with wonderful people in an incredibly healthy environment. It’s crazy, it’s awesome. We made it.

Now with having some sense of structure, I can breathe easy. We can laugh at what will always be our lives: kinda funny, kinda weird, and kinda ridiculous. Exhibit A? A month or so ago Nicole warned me that she had to Skype with someone mad early when she was sleeping over. I heard her get up and call Bed from Nepal, an environmental scholar who she found buried deep in a works cited. They talked about farming systems in Chitwan, Dhading, and Gorkha (wait, you’ve never heard of those places?). He offered to sponsor her for her Fulbright application. Fast forward to a week ago, and Nicole met Bed at Port Authority and played tour-guide for his first time EVER in New York City. Here is Bed:

I cant top that one, but I did make a new Peruvian friend who told me all about the time she put a baby shark in her arch nemesis’s suitcase before she flew to France (brilliant). I played in a city-wide startup basketball tournament only to guard a power-house from my high school that was never particularly friendly. I’ve dabbled in squash and lifted weights and wrote “poems” and roasted vegetables and wondered over and over why nobody ever smiles on the subway.  I’ve learned how to tweet (#nbd), I know what SEO means and sorta think it’s crazy cool, and I’ve become a Wednesday night regular at a bar, which comes with perks in the form of free tequila shots. (taco tacooo).

And while all this might be one long ramble, I felt compelled to write ever since Nic landed her job. Even though it’s only me writing on here, this will always be our blog. I’ll never forget writing this post when living in a door-less, window-less basement of my friends house in a DC suburb, knowing that I didn’t want to stop writing, that I had to keep going, that it had to take me places. I wanted to document what would come of our lives, what driving aimlessly around the states and moving to manhattan and dc and touring and teaching would amount to. Nic studied Climate and Society at Columbia and has now taken these skills from classroom to office. I went from swing dancing in Denver to writing about salsa. I think we’re both on to something. 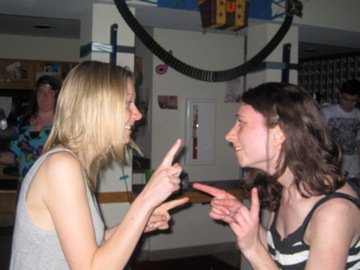 Posted on November 12, 2011, in Uncategorized. Bookmark the permalink. Leave a comment.