← life in a day
pretending wordpress is tumblr →

Heeeey. Hope you all had a fabulous weekend. If you’re in New York, I’m sure you were slightly confused by the weather, seeing as it was about 5 degrees earlier in the week and 50 this weekend. No mind…it made for a wonderful 5 mile run from Central Park to a Cassoulet cook-off in the East Village (5 is a trending number). But before that. 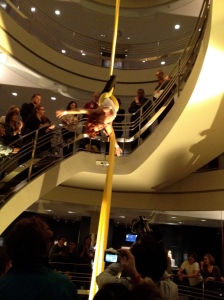 Friday, I tried something new: Boxing. One of the trainers at New York Health and Racquet has been trying to get me to try it, and let me tell you…it’s AWESOME. I was totally into hopping around the ring, giving a one, two, three punch..ducking under..throwing a left hook. Man. My trainer told me there was a “pop” behind my punch, meaning I could probably kill you (watch out!). Yet, about twenty minutes into my Rocky debut, Frank had me running around the ring, throwing 30 punches, then jumping down and doing burpees, then more punches, then pushups (with gloves, mind you), punches, mountain climbs, more punches..it went on and on. And on. Then when I thought I was free, we did a 15 minute ab workout where I contemplated dying. Frank was pushing me along, saying “cmon, you want that six pack!” while I thoughtfully replied, “no, I  really really don’t.” In any case, I somehow recovered and headed to the Rubin Museum, where I watched people swing around on ribbons (see picture, aint lyin), had a glass of wine, felt like passing out, went home and ate dinner, and..fell asleep. At 9. Perfect Friday night, if you ask me. 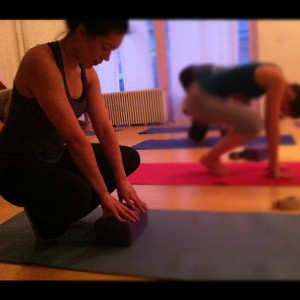 Things got real on Saturday, as Greatist + friends headed over to Times Square (?) to try some Kundalini yoga. I had done it once before (which I actually wrote about), so I was a bit scared. Yet, my second time around was a lot more positive and purposeful; our teacher really had us focus on putting intention behind every physically challenging movement and soft, inward breath. By dedicating the practice to something while using the pain to destroy negative energy, I was really able to get the most out of the class.

Having felt so “centered” from yoga, I decided that going out and drinking a fair amount of whiskey would make me feel like my old self. The night somehow consisted of travels to both the Lower East Side and Greenpoint, which are always two completely different worlds. On Ludlow, we had this dude come up and ask “are there any bars around here?” where I responded, “well…there’s one right in front of you, a million right behind you, oh, and seventy thousand straight up ahead.” Apparently that was the green light for him to keep talking, where he explained how he paints pictures that teach people how to play tennis. Real winner. Back in Brooklyn, a more clever pick-up attempt was made at Flo, though apparently no sparks: 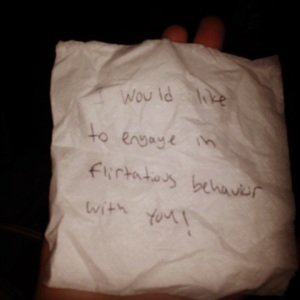 On Sunday, I woke up and headed to central park to meet up with my new friend Laura, and meet two other NYC runners, Katie and Jocelyn. I met Laura through Greatist (she is an awesome, supportive reader!), where I soon learned of her amazingness: she has run 50 marathons in 50 states. YEAH. Katie and Jocelyn are also wonderful wonderful people (not to mention marathoners & triathletes, too!), and the four of us hit it off. We winded through central park, made our way over to 1st avenue, and eventually down to a path along the East River. Five miles later and we arrived at Jimmy’s No. 43, a dank, (literally) underground restaurant that was holding a Cassoulet cook-off. The modest entrance fee went directly to local farmers whose crops were destroyed by Hurricane Irene, and the event included generous tastes of DELICIOUS bean and meat stews. I’ve never eaten so much duck confit, pork shoulder, and bacon in my life…and may I say I was in heaven. Our favorite dish was by two Austrian chefs who ended up knowing a bunch of Schwecherl’s from my homeland. (Why all these small-world things happen to me, I do not know).

The four of us talked running blogs, good food, and other things about LIFE, while well-dressed people kept asking us, “wait, did you actually run here?” And…..I may or may not have been coerced into running a Ben & Jerry’s Marathon in Burlington in May. EEEK. We’ll see. PS) Below we’re with our Austrian chefs/boyfriends. Obviously I was GLOWING. 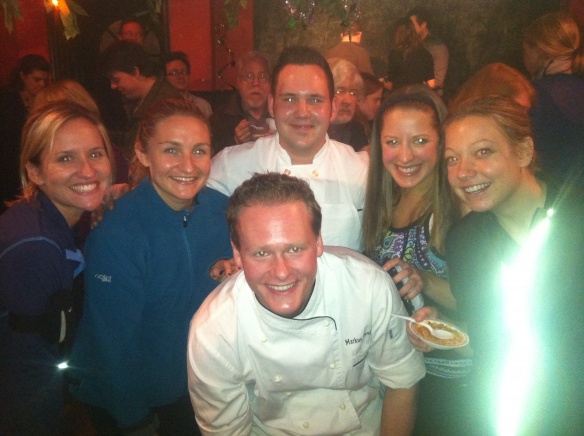 Posted on January 9, 2012, in Uncategorized. Bookmark the permalink. 6 Comments.

← life in a day
pretending wordpress is tumblr →