Race report time! I’ve never done one of these…so I guess I’ll start off by saying this was my first half, and there will be MANY more to come. This racing thing is addicting, eeesh. My training leading up to the race has been awesome, and I was really curious as to how fast I could run it and how I’d feel.

To be fair (and to state it now), I have never felt soooo shitty running before. My whole office was hit with the norovirus last week, and since then, I’ve been feeling really off. This whole week I was unusually exhausted, yet I was hoping to feel better by Sunday. Alas, by mile three, I didn’t even know if I would finish. Shall we break it down?

Before the race, I bumped into Jocelyn

and Ellie, a wonderful surprise! I was lucky to start off in the second coral, so was able to cross the start line about a minute after the gun went off. The crowd energy was AWESOME, and I got goosebumps seeing the huge pack of runners start moving once the race began. I also had Countdown playing (obvs) which set the mood. I did some weaving, but mostly stayed with the pack in order to keep my pace under control since I tend to go out too fast. So far, so good. Mile 1- 7:57

I actually did more weaving in the second mile while trying to find a good, comfortable pace.  The second mile was in 7:41 and I felt like I was finally beginning to settle.

Then mile 3 happened. I oddly started getting the chills, as if I had a fever. My body would get super hot, then super cold, and I felt nauseous out of nowhere. I thought I was going to puke, which is maybe why this mile sped up to 7:25 (run away from the sickness!) I definitely freaked myself out, but tried to ignore it and carry on..

Mile 4- 7:36, mile 5 7:54. This was back by the Harlem Hills, which are no joke. I felt good going up them, but still was experiencing some nasty chills and really started to worry. Luckily, Rhianna’s “Yo Da One” came on and it put me in a better mood.

By mile 6, my body felt better, so I tried to re-find my groove. Mile 6 was in 7:37, and mile 7, 7:32. At this point we finished one loop of the park and I felt more optimistic, even excited. I saw my parents in the crowd and gave em’ a wave, and was ready to conquer the second loop.

Conquer I did not. Mile 8 was in 8:07 and I thought I was going to pass out. I felt super woozy and light headed, and was seeing black spots (sorry I didn’t mention this ma, kinda downplayed it!). There was also a hill in there I pathetically climbed, while most people passed me.

Mile 9 must’ve been a downhill, since I ran it in 7:49. At this point, I just wanted to hit the 10-mile mark, since then I could tell myself I only had a 5k left, and no matter how awful I felt I could suck it up and finish.

At the 10th mile, I was really unsure if I was going to finish. I was incredibly frustrated since my legs felt great, but the rest of my body was struggling. This was also the second round of the Harlem hills, which were nooo bueno. Mile 10- 8:20.

Mile 11 and 12 were in  8:37 and 8:24, and I had to refer to my ol’ pep talk: “This hurts, but it’ll hurt just the same if you slow down. So go faster and you’ll be done sooner.” It really does work — the pain doesn’t lessen thaaat much if you drop your pace a little bit, and at this point I just wanted to find the finish line. The chills were back and I had goosebumps all over my body. Funny though: At this moment I also felt incredibly lucky that I was able to push through all of this, and that my body was actually letting me finish. I knew I had slowed down and wouldn’t hit sub 1:45 (my goal), but I didn’t care. I even think through all the delirium, I smiled.

After the race, I had a little moment that included the fetal position, a patch of grass, and a nice man who brought me over some water. Then I chugged some gatorade, found my parents, and felt a tad better. We cheered on Laura, who was running with her mom (so wonderful!!) and then afterwards, it was to Lansky’s for a deliciouuuuus brunch with Laura, Theodora, + families/friends! The conversation was anything but dull. Mimosas helped. 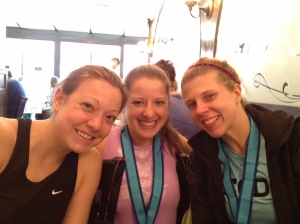 So while I’m not suuuper stoked about how this race turned out, I’m excited to try again. Oh, and it looks like I will be running a marathon in the future. Jocelyn and Laura are purchasing me a marathon entry for my birthday. How..sweet. (They’re sneaky like that…) Ps- “swashbuckling fun,” Jocelyn??

CONGRATS TO EVERYONE WHO RAN!!! And thank you for all the support and well wishes for this first race. I feel like I’ve just joined some super awesome, secret club that I never want to leave… : )

Posted on April 15, 2012, in Uncategorized. Bookmark the permalink. 6 Comments.