The next morning at the crack of dawn, we woke again, yet this time we weren’t up to see more sunrises or boil water for breakfast. It was chilly, but there was no time for a fire either. We had to break down camp and head out; we had a long drive ahead of us. 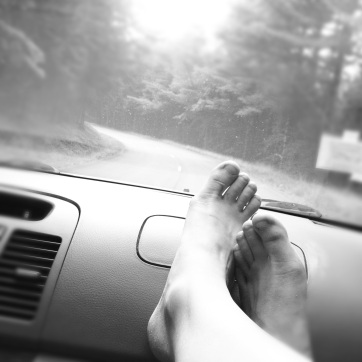 As we drove home, and pretty much throughout the whole small trip, I thought a lot. Nicole and I both agreed it was the most relaxed we’ve been in a long time — over a year possibly — and with a clear head and clean air, I wrote down some reflections of both the trip and…LIFE. Some are serious, others not so much. Shall we?

Trail mix changes serving size in the woods. Normally, a serving size of trail mix is a ¼ cup, or something ridiculously depressing. But once you’re on or near a “trail,” I say it changes. Nic and I went through three bags of trail mix, (or 38 servings) in four days, yet if we ate it for breakfast and lunch, or if our days were extended because we woke up at 5am instead of 10am, then dude, it’s legit. (Yet, pro tip: As awesome as the mixes with chocolate are, the chips will melt. And end up everywhere. Just a warning.)

It really is about the company you keep. It’s easy to get caught up in the nyc hype, doing things for the sake of doing them. This has got to stop! I’m really going to focus on spending time with the people I want to spend time with, rather than doing “city” things just because they seem sort of cool.

You can learn a little about somebody by their campground. Looking at someone else’s campsite is like peeking into their home — no windows or doors obstructing your view. Some were camping pro’s, having multiple tents, tarps, cooking grills, a DOG, a ton of food, and so on. Other’s were pretty minimal like us; I saw a young couple pitch a long, tubular tent that was close to the ground, and all that was on their table was a box of kashi cookies and a brita. I judged accordingly.

I’m innately more stressed in the city. I didn’t really realize until I really left, but the city just breeds anxiety. I don’t know if this is the case for most people, but I think the environment really has an effect on me, something I have to try harder to combat as I spend (at least) another year here.

Nothing beats the sounds and smells of a fire. Every night, it lulled me to sleep. I have refused to wash most of my clothes because they still smell like smoke.

For a road trip, always make sure you have enough music (and adequate ways to play it). We left New York with a fully charged iPod, the Pandora app downloaded, and absolutely no way to play music in the car. For the first part of the trip, we did the ol’ put-your-iphone-in-a-cup-to-amplify-sound trick, along with browsing through the (mostly shitty) radio stations. It didn’t take too long to find a bunch of my dad’s burned cd’s (circa 1999?) named “Jim’s Greatest Hits Vol 1…2, 3, so on and so forth, but they were weird (sorry dad!). THEN, luckily, we found Fleet Foxes’ Helplessness Blues. We listened to the album to our heart’s content. Nine times. We also listened to a senior citizen financial Q&A radio show for an hour on the way home. Learned a lot about 401 K’s.

Measure how hard a hike is by who’s coming down. Nicole and I were a little unsure of how hard some of the hikes were (especially when they called for climbing up rocks with metal rungs…hold on tight?). But if you see children heading out of the trailhead, then you know you’re good to go.

You can (and should) take time to get away. I really felt like I went on a juice cleanse (without the juice…). Going away for four shorts days allowed me to think clearer than I have in a while, sort out my priorities, and feel appreciative of so, so many things. 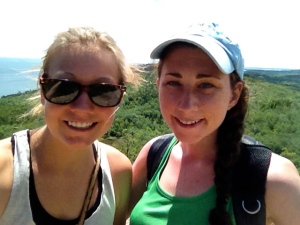 And that’s all I got. Hope you enjoyed these little recaps! Love, Laura and Nic ps) The final two videos are of the drive home…in delirium mode for sure.