FIRST OFF! Before I begin, let it be known I just learned how to make collages (hello year 2012) so if I overuse them…sorry I’m not sorry? : / 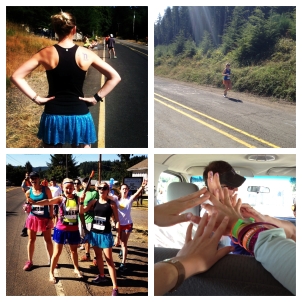 Anyways, on to the rest of the running! After we finished our first legs, we drove to Portland as the sun was setting, and ate dinner at a bar right in the heart of the city. (Or so I think, it was dark and my first time in Portland.) It was strange ordering coffee with a burger…buuuut with a seven mile leg a few hours ahead of me, I figured it would be best to stay awake before running. (Sarah was a champ and had a beer with her meal. Hero.)

By the time Van 1 was ready to run again, it was close to midnight, the temperature had dropped tremendously, and most of us were digging for extra energy to stay awake. (I went with M&M’s.) By nearly 1am, we had driven to the third exchange and I threw on my night vest, hat, and headlamp, and rolled out of the van to go run.

I definitely wasn’t 100% feeling it, so I turned to Steph for some extra energy in the remaining minutes before Laura would be heading down the road, ready to pass the bracelet on to me. (Photo courtesy of Steph with Jay in their supercool night gear!) I also kept looking at my GoSportID to remind myself…miles to go before I sleep..miles to go…

Once it was finally time to run, I grabbed the bracelet and immediately tried to get in the “zone.” I was running alongside a highway with the huge, starry sky above me, and except for the volunteers at every mile or so, along with some cars, I was (seemingly) alone. Then I saw a light shining from behind me, and watched a girl pass me. Out of instinct, I slowly realed her in, and once we were on pace together, started chatting.

By mile six, I let her go so I could try to enjoy the fact I was running alone in the middle of the night, in the middle of nowhere. Then, my foot started to sear with pain. I tried slowing down, but realized the pain didn’t lessen. I knew Steph and Jay were behind me, so I even considered stopping and waiting for them to catch up and call for my van. But of course out of sheer stubbornness, I quickly realized running faster didn’t make the pain any worse…and the quicker I finished the last two miles, the better. I looked down at my Warrior Wisdom bracelet, which says “Breathe.” I calmed down, tried to relax my arms, and moved as softly and swiftly as I could (while yelling “fuck this hurts like hell” in my head…). I ended up closing the 7.2 miles in 52 minutes — around a 7:18 pace — and bit my tongue as my teammates helped me off the course and into the van to lay down and ice up.

The rest of the night is kind of hazy; I remember eating a lot of trail mix, trying to get out to watch the other hand-offs/cheer on my teammates, and also attempt to get a few minutes of sleep. Before I knew it, the sun was rising, and it was time to drink coffee and gear up for our final legs.

Regardless of the whole foot thing, I was having a blast. I was totally inspired by the positive energy throughout the rest of the night into the morning; everyone was so supportive of one another, and spirits were kept high through the sleepiness and super sore hamstrings. I was a bit nervous for my last six miles, but my awesome teammates offered to run with/for me if I kept having foot troubles. I taped up, crossed my fingers, and headed out into the sun. Luckily, the pain was bearable, and I did my best to fight through the heat and the hills. I reveled in the fact it was my last leg, and soaked in every challenging moment. The most satisfying part of the run was either the scenery (gorgeous) or when I passed another dude in the same blue sparkle skirt (epic).

Once we all finished our legs, I finally changed for the first time (gross, sorry), used my Shower pill (can I always do this instead of a shower?) and headed to our cooler to “hydrate” (I swear I drank a ton of Nuun too). Then we drove to the beach to cheer the Van 2’s who were bringing our teams across the finish line. More on that soon !

Posted on August 31, 2012, in Uncategorized. Bookmark the permalink. 9 Comments.