A lot has been happening leading up to the NYC marathon, so I figured…why not write about it !

First thing’s first….Hurricane Sandy. What has stuck me the most throughout this whole thing is how excited people were. So many people I talked to were like “f-yeah, I don’t have to work! This is an excuse to do nothing! I love storms!” On the one hand, yeah…I get it. You kinda feel like a kid on a snow day. Except, SIR, this isn’t six inches of snow…it’s a freakin hurricane. A very large one. A lot of people were skeptical due to Irene’s hype last year, but still, you can’t compare one storm to another. And there’s nothing “fun” about a huge storm that ended up causing a lot of damage.

Ali and I prepared like most other people, buying water and extra candles, making a batch of rice, stocking up on cans of beans, veggies, and beer, and (unsuccessfully) finding a large jigsaw puzzle. As for the day of the storm, we thankfully were hardly affected. We had Internet for most of the day, so the both of us were able to work from home. When the interwebs abandoned us,  we stopped working and started listening to music, playing the uke, singing, and trying to start out own band while drinking Bud Light and eating pumpkin bread. That was magical. (But you don’t need a hurricane to shut everything off and do that, right?)

OKAY, on to marathon training. My bib into this year’s race surprised no one/thing more than my own legs. Still, I felt mostly ready and able to get some long runs in before a quick taper, until I woke up early last week and felt a nasty pain in my foot…again. Immediately I thought I re-injured myself, until I realized while it was the same pain, it was the opposite foot. What luck. Rather than freaking the f$)#CK out (well, I did, but only for a minute) I “calmly” wrote down my “feelings” in my Believe I Am journal and made a plan to stick to cross and strength training for the week. I was able to endure the bike for 30 mins tops (I hate, hate, hate cross-training) but when I tried to use the elliptical, I kid you not: I lasted four minutes. Approximately one Kimbra song.

I planned on running this week, but with the storm yesterday and the pouring rain I am currently watching from my window, I’m out of luck, and a little stressed. I just learned our team members for nycm can’t run together too, so I’ll be by my lonesome in my corral, in my DRESS, come Sunday. Honestly, 26.2 miles in five days seems a little terrifying. (#gowiththeflow)

But! I am running for an amazing cause, and have been able to raise an awesome amount of money. (Thank you’s in the works!) AND, so many people are coming to either race or spectate, and I cannot wait! I hope you guys like HUGE hugs.

Alas, one thing that I’ve been yearning for, and which has helped me de-stress, is getting back into music. Playing/performing used to be a huge part of my life, and I really miss it. I’ve been dabbling on finale (a music notation software) learning more chords on the ukulele, and googling like a mad-woman where I can play a piano around these parts (preferably for free, and more-preferably a piano, not a keyboard!) I really miss it, and find myself downloading and reading more music, singing in the AM, and thinking about new instruments I want to learn. Ali’s down, too: 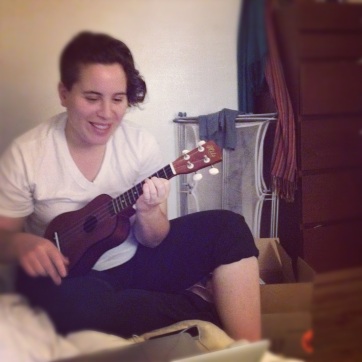 However, if I can’t lug a huge piano into my little apartment (or can I?!) I can write…which is another thing I’ve been focusing on lately in my “free” time. I’ve been writing more random stories, fiction and non-fiction, and it’s been really fun. I also helped my friend put together this list of Very Important tips for surviving the storm. So there’s that.

Posted on October 30, 2012, in Uncategorized. Bookmark the permalink. 5 Comments.