← having vs. wanting
costa rica →

This week was an interesting one as far as marathon training goes. After the high of an awesome long run on Sunday, I was greeted by some less-than-stellar challenges. Tis life, I guess.

Monday: Optional rest or yoga.
You know those people who “forget to eat”? Yeah, I didn’t get them either…until Monday rolled around. I was super focused/slightly stressed at work, and before I knew it, it was 6:30 and time to go to my favorite hot yoga class. I realized I literally only ate a few handful of pistachios and a macaroon all day (!!!) yet I still wasn’t hungry and decided to wait until after yoga to eat. Yeah. Mistake. The class was super crowded and I was stuck in the middle of the room inches away from other sweaty, sweaty people. At one point I put my head down on the ground and the whole floor was spinning. I jetted out of there as soon as class was over and inhaled food. Tons of it. Namaste!

Tuesday: Cannonball warmup, 4 miles (7:50), core.
Nothing to note here. Except that I was stupid and wore shorts because I thought it was still “warm” out. It was probably 30 degrees. Poor choices.

Wednesday: Dynamic warmup, 5 miles (dreadmill, 7.5 mph), 6 x stride (dreadmill, almost fell off) 30 minutes lift.
I was not looking forward to working out at the gym, but it ended up not being too terrible. I’d rather run and lift at the same time then split it up throughout the day, and was surprised that I survived 5 miles on the treadmill. I played many, many mind games to pass the time.

Thursday: Dynamic warmup, 8 miles (8:00 pace), 8 x 100.
Well, this run was interesting. I was supposed to do six miles, so decided on an out-and-back that would take me to the East River Park and home to the track for speed work. However, it rained the night before and the exit I normally take to get back to the Williamsburg bridge was flooded. I had to take a detour to get back to Brooklyn, which meant I clocked in 7 miles when I got to the track. And then after the 100’s, I realized it was 8:45 aaaand I had to be at work in an hour. So I had to run the mile home from the track, where I took a record-speed shower and somehow got to work on time.

Friday: Dynamic warmup, 4 miles recovery (treadmill, 7 mph), core
Nothing to note. I was not digging the super cold morning temperatures, and knew I could bust out 4 miles on the treadmill after work. Twas fine.

So, I’m leaving tomorrow, which is SO AWESOME. However, the one littttle not awesome thing is that I woke up in the middle of the night shivering, shaking, and super nauseous. I ended up throwing up for way too long (WHAT?! Also, sorry) and have been bed ridden since, only able to hold down water. Not a good look. I’m more frustrated than anything because I had plans to finish up some loose ends at work, make copies of my passport, and go on a trek for sunscreen, linen pants, and a fanny pack. (Yes.) I’m not worried that by tomorrow I’ll feel better (fingerscrossed) but I’m also so confused as to how I got sick. I never get sick. Germs never get to me! This sucks.

In the meantime, I’ve tried to “pack.” So far I have an empty backpack, two books, birkenstocks, passport, and half a bathing suit. Makin’ moves. 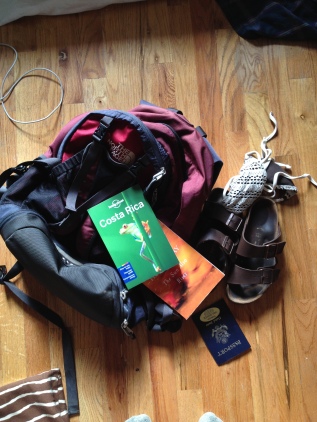 I also have been practicing my Spanish. I emailed my dear friend Flo, who’s from Argentina and just happens to be fluent. Here’s what she helped translate for me:

“I have a boyfriend” Tengo novio

“I am innocent” Sou inocente

“May I have guacamole?” Un guacamole por favor?

Fingers crossed I wake up tomorrow alive and can get on this damn airplane. Pura Vida!

Posted on January 19, 2013, in Uncategorized. Bookmark the permalink. 12 Comments.

← having vs. wanting
costa rica →