It was an interesting and incredible experience I will never forget. First and foremost, every single Ghanaian loved Barack. Whether or not they actually knew about his policies and his beliefs, they did know he was a black candidate, had roots in Kenya, and represented the democratic model for Africa. In a way, it was both inspiring and disheartening: Their expectations for what Barack could potentially do for Ghana — for Africa — were incredibly high.

Heck, they even wrote a song for him that played pretty much on repeat from September to January.

Election day was one giant party. Me and a bunch of friends heard they were showing the election at an outdoor hotel in downtown Accra, so we headed over there to check it out. What we ended up walking into was a huge space with two large screens: one airing CNN and the other Aljazeera. There was beer and food everywhere, a huge stereo system/DJ, and an area to buy what else, but oversized t-shirts with Obama’s face on the front.

We spent the entire night watching the election unfold. The news would be put on mute during commercials and classical Ghanaian Highlife would blast; people would get up and take huge swigs of beer, dance around, and yell “Barack Barack!” before sitting back down.

We did this for hours. Because of the time difference, I remember the sun was rising when Barack went up to accept his Presidency. It was one of the first times in my cynical youth I was proud to be from America. Nobody had slept all night, but once again the hotel turned into one, huge dance party:

The energy surrounding that day and the coming weeks is something that’s hard to describe. Ghana was having their own Presidential election a month later, and Obama’s victory was coupled with whether or not power would stay with the New Patriotic Party or change to the National Democratic Congress. The race was pretty much between Nana Akufo-Addo (NPP) and John Atta Mills (NDC). Atta Mills ended up winning in a revote in December (!! which was cray, ask me about that in person), and he sadly passed away this summer right before finishing his term. 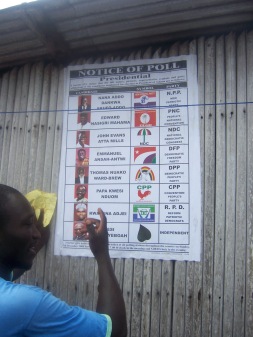 This year there will be no huge bottles of beer, highlife music, or Ghanaians giving Americans huge, huge hugs. This election almost feels weird. It feels like it crept up on us with Hurricane Sandy, scared us with Paul Ryan (sorry, he actually terrifies me) and confused us as we looked back at the last four years and tried to evaluate whether or not Barack did enough. But for the sake of not turning this into a political blog (yikes) I’ll just say that my vote has not changed from 2008, and I hope with all my heart that today, the Blakk Rasta Obama song is echoing throughout the streets of Ghana.

Posted on November 6, 2012, in Uncategorized. Bookmark the permalink. 6 Comments.