I must say, having a running plan is the best thing ever. There’s absolutely no guesswork — I just do what my little sheet taped to my wall tells me what to do. Anyways, here’s a recap of what went down this week:

Monday: Cannonball warmup, 4 miles (7:54 pace), core
For day one, I was more excited than anything. It was one of the few times I’ve actually “warmed up” before a run (I know…) and this cannonball warmup was really cool. I was a little all over the place since I wasn’t used to the routine yet, and there were many chairs and tables in the way since I was doing it in my apartment. After the run, I less than happily did core work, which is deeeefinitely one of my weakest links. I hate that burn. And six-pack abs. Oy.

Tuesday: Dynamic warmup, 5 miles (7:55 pace), 6 x stride, 30 minute strength train
For whatever reason, I was really tired this morning. When I got up to warmup, it took every ounce of willpower to not hop back into bed as the sun was finally starting to rise. 5 miles at that pace felt SO fast for some reason, which kind of bothered me. Doing strides felt nice and I think finally loosened me up. I almost skipped strength training in the PM, since I was literally falling asleep at work. But, I got to the gym and did pushups, squats, core, lunges, aaaand lots of nice stretching and foam rolling. 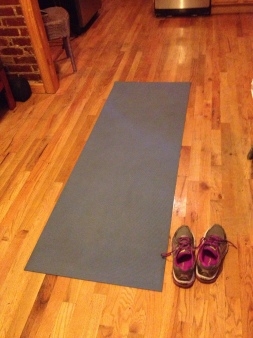 Wednesday: Optional rest or yoga.
I went with Jocelyn to Yoga Vida to take a class with Hilaria, Alec Baldwin’s wife. (Check em outtttt.) The class was SUPER crowded, and for whatever reason I was squished between the only two guys who were breathing awkwardly heavily and flinging their sweat on me. The class felt more like a boot camp, and at once point we did “ABS!” for 10 minutes. I almost died. Not zen. However, any fitness outing with Jocelyn warms my heart, and apparently Alec even walked into the class. I missed it, though, probably more concerned that the guy to my left might collapse… on me.

Thursday: Dynamic warmup, 6 miles (7:49 pace), 8 x 100.
This run was great. My legs felt fresh and it was warm out. I did 100’s on the track in a tank top and shorts in JANUARY (!!!), yet the tricky part about doing speedwork after runs is the track is about a mile from my apartment. I allot myself about 15-20 extra minutes so I can walk home, yet I still end up rushing every single morning so I’m not late for work. To save time, I eat breakfast and drink water in the shower, which is something I do pretty regularly. Aaand it’s also something I recently learned is a weird thing to do.  Now I’m really scared that the other “normal” things I do are actually quite strange. (I’ll just keep my day-to-day habits to myself…) In any case, here is the shelf where I can keep my oatmeal nice and dry.

Friday: Dynamic warmup, 4 miles recovery (8:13 pace), core
This run felt nice and relaxed, and was a good way to kick off Friday. Especially since later in the night meant tacos and tequila (and wine…and guac…).

Sunday: Dynamic warmup, 13.1 miles  (7:49 pace), IT Rehab Routine
This run was awesome and hilarious. Awesome for the fact that it’s the longest I’ve run since October, I was wearing shorts, and ran a new route which I love. Hilarious for the fact that I PR’d in the half-marathon, technically. I woke up so excited to run (mainly because of the weather) and decided to try going over the Pulaski bridge to Queens, the Queensborough bridge to Manhattan, down 1st avenue from 59th street to the east river path, then the Williamsburg bridge back home. It was magical. I definitely was feeling it by mile nine — at that point my legs were super tired and probably confused as to why I was running for so long. Buuuut I thought about the brownies I’m making for a dinner I’m going to tonight, which carried me happily home.

Posted on January 13, 2013, in Uncategorized. Bookmark the permalink. 10 Comments.