Marathon training week 4: I’d be lying if I said I wasn’t nervous jumping back into training after ten days of being pretty inactive. That said, I guess the power of rest once again proved..powerful?, as this week went pretty well. 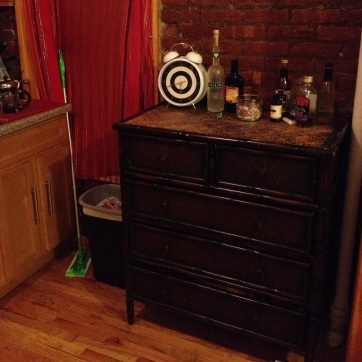 This was the day I traved back to NYC, aka that time I left 80 degree sunny skies to return to a slushy, icy cold mess in NYC. It wasn’t easy to get back into the groove, but I kept myself busy. I did laundry since everything in my pack was preeeettty sweaty, and rearranged some new furniture Ali and I acquired. New dresser? Makes the perfect kitchen cabinet! (Seriously, there’s oatmeal in there…) I considered going to yoga, but didn’t want to trek into Manhattan. I’m going back tomorrow and cannot wait.

Today was the day I introduced my legs back to running, and surprisingly, I felt totally fine. I wanted to keep things easy, but found an 8min/mile pace felt super smooth. I was happy. I also remembered I volunteered to check out a new cardio class at Chelsea Piers for work, and at first was afraid that I’d be overdoing it. However, the class ended up being SO much fun, and not that intense at all —  HIIT mixed with running drills, and strength and balance exercises. It actually felt good to stretch the body and do some strength stuff. (Thanks for the pic, Jordan!) 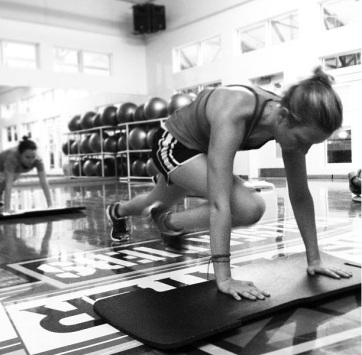 My legs definitely felt a bit tired on this run because of the double workout. My plan also called for a strength routine, but I skipped it since I volunteered myself for another workout through Greatist that was happening the following day.

This day wasn’t the best. I woke up at 6 am to get the run and speedwork in, and for those in NYC, you probably remember how freakin cold, windy, and rainy it was. There was a time where I had to hide between two buildings because I literally thought I was going to be blown away. And then it rained. And then my hat flew off my head. I felt slow and cold, and by the time I got to the track wasn’t feeling the 800’s. They were at 10K pace though, so not terribly fast at all, and it actually felt good to get some solid turnover work in. The real pain came later, though, when me and a few friends from work went to a capoeira-meets-bodyweight-workout at 24-hour fitness. The class itself was awesome, but my whole body was feeling super tired — from waking up early to fighting the wind, my legs did not want to be squatting. (And there were a lot of squats!) Brett’s class was a blast… I was just a bit cranky (:

I took rest. This day actually called for 4 miles, but I switched around some things because I knew my body was feeling shot. In other news, I made macaroons and learned they are the easiest things to bake in the planet. Four ingredients! Whoever invented these things is a genius.

I ate about 27 macaroons the night before to, you know, “fuel up” before this long run. I knew it would be cold, and it may not be pretty, so I decided to be as positive as possible about it. (Thumbs up in my ninja outfit!) And to my surprise, this run was fucking awesome. When I left my house it was 19 degrees, so I told myself that the weather would probably never get worse than this through the entire training cycle. I wanted to keep it easy, but found my first few miles right under 8 minutes. I traveled from Williamsburg to Queens, Queens to Manhattan, and over to Central Park, and by mile 7 still felt strong. I relaxed into a super comfy 8:20’s pace around the Harlem Hills. Other things of note: I saw a man wearing shorts and no shirt (you are insane) and accidentally spit on a dudeman who was passing me on my left (I’m SO sorry).  By mile 11 I was out of the park and took the west side highway down as close to the 14th street L as I could get (to take the train back home). At that time I noticed how good I still felt, and without realizing it, saw my splits were getting faster and faster. I closed the last three miles in 7:39, 7:32, and 7:24, and when the run was over I felt like I could have kept going. Minus my face feeling like it was going to freeze over.

Well now. I woke up ready to do an easy 4 miles, and it wasn’t until I was out on the roads did I realize how crappy the conditions were. Everywhere I went was icy, and I had to stop myself from speeding up in order to avoid breaking an ankle. I went on the Williamsburg bridge and got stuck behind a guy throwing down salt, and eventually turned around and timidly returned home. It wasn’t a fast one, but it was a safe one.

In other news, now that I’m back in marathon training mode, I don’t think I’ve ever been so hungry in my life. I am literally eating allofthethings, and no amount of protein can turn off my stomach growls. I tried desperately to sleep in this morning (despite these great runs, I still feel pretty exhausted) yet my hunger woke me up at 8am and I couldn’t fight it off.  In Costa Rica, I had the opposite problem. My appetite was nowhere to be seen — I probably ate only two meals per day (well, three if you count mid-afternoon mohitos) which is veeeery strange for me.

Posted on February 3, 2013, in Uncategorized. Bookmark the permalink. 4 Comments.