A day in Chicago, a night in the cornfields of Iowa.

After a wonderful nights rest, Rebecca showed Nic and I around her beloved city. We only had half a day, so Rebecca took us to some tourist delights. While I very much enjoyed all of what we saw, I am eager to visit Chicago again, and see some of its off-the-beaten-path treasures.
We took the Chicago transit system, uniquely called the “L,” over to Millennium Park. What is great about the subway is that it is above ground, so we had our own little tour of the city. The first thing that struck me about Chicago was the suburban feel in such an urban city. Amongst the city streets are houses with garages, basketball hoops, and gardens. I’ve never seen so many trees in a city, which for me was a real perk. Millennium Park was beautiful– full of greenery and artwork. After wandering around we headed to the Navy Pier, to say hello to a tourist hot spot and wondrous Lake Michigan. Rebecca told us about the history of Chicago, including the Great Chicago Fire in 1871. We listened, we enjoyed. We ate cinnamon-roasted almonds.

Half a day does not do Chicago justice, but we were eager to get out West, so left mid-afternoon. The plan was to drive for the rest of the day and find a campground in either Iowa or Nebraska. We painfully decided to check out Iowa’s capital, Des Moines, but soon figured out that it is pretty awful. I think we gave it a two out of ten, and only because it had nice signs. The only thing worth mentioning is that there is a “wall of pride” there, but I still have yet to figure out what Des Moinesians are prideful about. Whatever.
We kept driving and driving, hoping to soon arrive at this campsite in Nebraska. I had talked to a man directly on the phone, who told me about a shortcut to the park (see post-it below). He mentioned that the park would be empty due to a storm that just passed by, but we were welcome to pitch our tent in the upgraded RV section (woohoo!) and then leave him $10 in some box the following morning. It all sounded OK, except that we fucked up the short-cut directions and ended up getting lost in the cornfields of Iowa. After driving around in circles, stumbling to 24 hour gas stations that were closed (thanks), and getting slightly nervous, we sucked it up and began looking for a Motel 6. 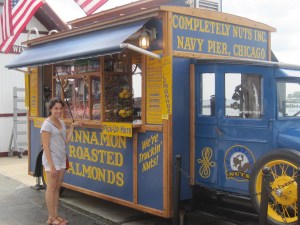 We found one, and guess what? It was full. Now why a Motel 6 on the border of Iowa and Nebraska was all booked I do not know, but we were lucky enough to find another just as cheap just as stingy motel next door. We took showers, set our alarms for 7 am, and slept soundly, ready for our next day of driving to Colorado.

Posted on August 2, 2010, in Uncategorized. Bookmark the permalink. Leave a comment.