>
A foreshadow of things coming full circle, and Colorado.

So, after waking up at the wondrous Rath Inn, we took full advantage of the $50-a-night- amenities (filled up on the free coffee, filled our cooler with the free ice) and made our way towards Denver, Colorado. Nicole’s cousin Corrine has been living there since the fall, so our plans were to spend the night with her and then head north to my family’s home in Fort Collins the next day.
However, before we get to the Mountain Man state, I want to tell you about a “small-world” story. In somewhere- bumble-fuck Nebraska, Nic and I stopped to get gas. I specifically remember having a dandy conversation with a man inside, who was trying to convince me to attend a festival in Northern Nebraska. All the while, another NY licensed car with two guys was pulling into the station. We obviously talked to them: “so, uh, what draws you to Nebraska?” Turns out that one of the two is from Saratoga, which I thought was small-world enough. I asked if they left from the small-town in upstate NY where I happened to live for the past three years, and they said they actually left from College Park, Maryland, since they both attend UMD and run xc/track there.
So here I am, in Nebraska, with two guys that know my best friend, Danielle, who also runs xc/track for Maryland. If that wasn’t enough, we ran into them again in another bumble-fuck gas station two miles off the highway in Colorado. Aaaand to make things come nearly full circle, we saw one of the two guys once more at Danielle’s house, on our last stop before returning home. It wasn’t in person, though:

(he’s the bottom left)
Anyway, that’s my story. I guess it’s not too exciting. Whatever.
So, back to Colorado! We made it to Denver, only to be greeted with what we soon learned to be altitude sickness. Yes, Denver is situated one-mile above sea-level. And yes, Long Island is one-mile below one-mile above sea level. So all in all, Nic and I were blasted with headaches, nausea, and dizziness. Despite ill-feelings, we took a nap to get back on our feet, refueled with pasta and soup, and had Corrine take us out in Denver. We had a relaxing night, spending most of the evening at a hippie-type cafe/bar downtown, where people were swing-dancing upstairs. There was also a palooza of free books for the taking, so it was all-in-all a successful evening. Here is a sub-par picture of the dancers, and here is a picture of us and our new books outside the cafe. 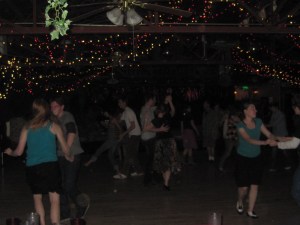 Posted on August 3, 2010, in Uncategorized. Bookmark the permalink. 1 Comment.