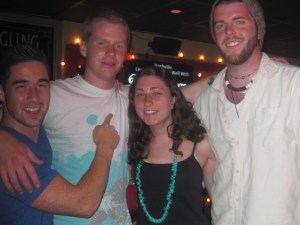 A Splendid Coincidence
After our stomachs were filled with Sonic fast-food, we said goodbye to both Little Rock and Knipper and got back in the car. Where to next? 400 miles east to Nashville, Tennessee!
Nicole’s good friend Devin and a few other Stonehill kids were also driving around the US; they rented an RV and were going on tour to promote a new CD. Nic decided to call Devin to ask him if he had passed through Nashville yet, and if so, to recommend some places to check out. Turns out they were ALSO headed to Nashville, and had two shows that evening! We were really excited to see some familiar faces, hear good music, and explore a new city with friends (that were under the age of 40, might I add).
The first bar we went to had an open-mic; four performers would sit on stage and then they’d go down the line and back, singing their little country hearts our and strummin on their guitars. I soon learned that people are TALENTED in Nashville, and while country music may not be my thing, I did appreciate their musicality. Also, almost all of them had a little story to tell before their song, which always went something like this: “hey ya’ll, I’m from a small town in Alabama (or Tennessee, Mississippi, or Arkansas), and this here song is bout tryin to make it in the big city.” Most songs also had to do with love, God, southern food, or county fairs.
After Devin and his friends performed, we went to another bar that lured a younger crowd-looots of southern sweet hearts with cowboy hats, really tight jeans, and really big butts. We listened to more live music, marveled at the fact you can smoke cigarettes inside, and slowly fell in love with this unique city.
We drove home at around 3am (way past our bedtime) and I got pulled over for the first time EVER right on Broadway downtown. I forgot to put my lights on…my bad. What can I say, the city lights were just so bright! During the whole ordeal, Nic was pretty inebriated in the passengers seat, so she was laughing and gladly offering to pay for the ticket. Which I didn’t even get. Hooza!
More about our following day in Nashville soon, which included biscuits and grits, whiskey saloons, and the grand ol opry. 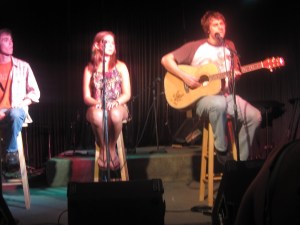 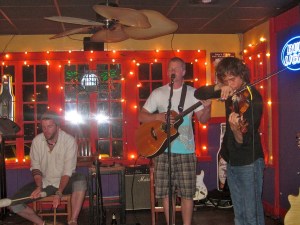 Posted on September 12, 2010, in Uncategorized. Bookmark the permalink. 2 Comments.