A little past noon on Friday, May 4th, we gathered our duffle bags, amplifiers and instruments, pillows, sunglasses, and bourbon, and several grocery bags filled with Trader Joes snacks. We spent a good thirty minutes figuring out how to assemble our roof-bag (which was advertised as 99% waterproof; we kept our fingers crossed), and said goodbye to friends who gave us their best, along with a batch of homemade granola bars. We piled in, turned on Akron/Family, and began our journey across the country. 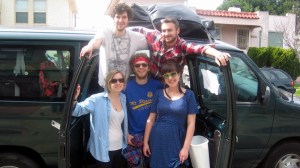 We also did a little shake-weight in the van to, you know…exercise.

Our first stop was to Pitzer College, one of the Claremont Colleges outside of L.A. We were leaving from Berkeley, and had about a 400-mile journey ahead of us. Oddly enough, even though 400 miles is quite far, the distance becomes deceptively brief when you are only covering one state. A car trip from Berkeley to Claremont takes about the same amount of time as driving from Portland, Maine to Trenton, New Jersey: roughly 6 hours and 46 minutes. Still, I would choose meandering through the coastline of California over the Mass Pike, the New York Thruway, and the George Washington Bridge any day.

We made it to Pitzer as the sun was setting, curious as to what we would encounter at this stereotypical hippie-school. Luke’s friend’s sibling, Emily—our contact to the school, greeted us. She was dressed in an interesting manner: a sporadically colored dress, face-paint, and dyed hair in heaped braids. We quickly learned that we were playing at an art-event that was promoting “the other-side.” We were essentially performing at a student circus.

After loading in our equipment, we did our best to fit in with the rest of the student body. Kaila and I had our faces painted and bedazzled, and we all dressed ourselves in sparkly boas and mardi gras beads.

Pitzer generously fed us veggie burgers and grilled pineapple, which fully prepped us for the free kegs of beer the school was providing. The campus police put up a fence to designate where the 21+ kids could drink, but the loose constraints to this rule reflected the whole school’s attitude about, well…rules. I grabbed my beer, walked out beyond the fence, smiled and waved to the (probably stoned) campus police, and went to finish my second veggie burger on the patio as I sipped on my free beer.

On to the show.

It was great! There were about 200 kids packed in our outdoor venue—many were literally inches away from our faces. The energy of such a compact, robust crowd was amazing, which somewhat made up for the sketchy sound system (they had all our sound running through one line, which resulted in Kaila’s keyboard and my mic to intermittently conch out…woops). Still, our performance was extremely well received, and we had a blast as the Pitzer kids danced and sung along to our hour-long set.

A highlight, for me at least, was when a fine young Pitzer gentleman felt so inclined to give me a thin mint during a song. Inclined Pitzer gentleman, if you are reading this, thank you.

After our show, we blasted Latino music in the van while we loaded out, and played some parking lot beach-ball soccer to pass the time. We packed with ease, for Colin had talked to some new fans that offered to put us up in their off campus house, providing us with a free place to sleep. With all our equipment in the van, we drove to the address we were given, which led us to a complex of apartments. Once in the apartment maze, Colin went to look for the phone number of the “friends” we met, and to his avail, learned it was never saved into his phone. As we sat in front of a row of about 100 apartment buildings, we knew we were out of luck. We drove back to the campus, ate a majority of the snacks we had bought earlier to mask any sort of stress, and indulged in a few swigs of whiskey. Danny and Colin went off to some sophomore dorm party, and Luke, Kaila and I brainstormed about places to sleep while we proceeded to finish off the homemade granola. In the end, we were able to get swiped into a nearby building, and spent the night in a luxurious all-girls dorm common room, equipped with plenty of floor space, a few couches, a nice piece of armoire, and some fake plants. 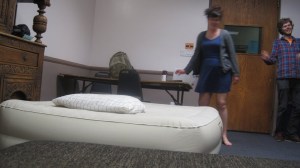 We slept with plenty of beer and burger in our bellies, along with the satisfaction of a free place to crash, and more importantly, a well-received and heavily attended first show.

Posted on April 2, 2011, in Uncategorized. Bookmark the permalink. Leave a comment.