Ah. Where to begin?! Each team from Van 1 left early in the morning to make their way up to Mt. Hood. When I first saw the mountain from a distance, that moment reminded me of when I drove into Arches National Park for the first time. I was totally taken aback; it was incredibly beautiful. I couldn’t believe we were headed that way to start the race.

But we were, and we did. 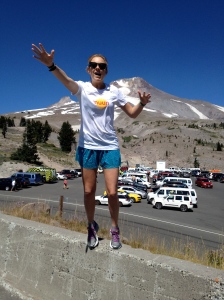 But before the gun goes off, let me introduce Van 1 from Team Noon! (And I totally stole this collage from Jocelyn because I have absolutely no idea how to do this, so Joc I owe you lots of $$ and red wine and my first born.)

On Mt. Hood, we hung out with the other Nuuner’s, covered ourselves in tattoos, and headed over to the start to cheer on Team Morning and Team Night. The gun finally went off for team Noon — with Kelly leading off — and we screamed our little hearts out before jumping back in the van and driving down the mountain to meet her at the first exchange.

Kelly (obviously) rocked her tough leg down the mountain, then handed off to Laura, a Nuun employee who heads their golf business of the east coast. She, too, had a kickass leg, and maybe we can partially attest that to the “Laura Energy” we gave each other before the start… 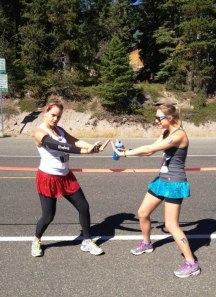 Next up was me, and I must say I was more nervous for the exchange than anything else. (Don’t ask me why.) However, it was a success, and many many thanks to  Sarah for capturing what will forever be the only “badass” picture of me. 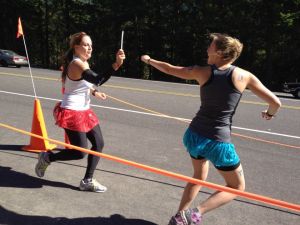 Now, most people told me they rarely ran with other people during their legs, and would occasionally pass or be passed by somebody. (Roadkill!) However, for two out of my three legs, I ran/chatted with someone practically the WHOLE time, which…had its pros and cons. For this first leg, it was all downhill, and I was running with a 60 year-old nameless woman from Michigan. She kept telling me how she was with “Team Old.” So even though the pace felt fast, I couldn’t let her go on without me. (I know, I know, stubborn stubborn.) Weeeell, turns out Teammate “Old” decided to run our first mile in 5:40, and I ended up averaging a 6:40 pace for 4.25 miles. Blame it on the speedwork.

Next up was Jocelyn, who crushed her longest leg, and then passed off to Sarah, who dominated the super hilly six miles that were ahead of her. Molly closed the first, final leg for Van 1 (and I think came in five minutes earlier than expected?!) before we handed off to Team Noon’s Van 2 and headed to Portland to get some food and gear up for our night shifts. 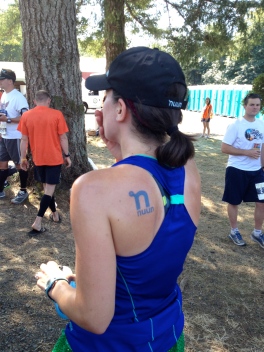 Next up: Portland in the middle of the night, one of the most epic/challenging seven miles I’ve ever run, and tons of delirium. Stay tuned.

Posted on August 30, 2012, in Uncategorized. Bookmark the permalink. 12 Comments.